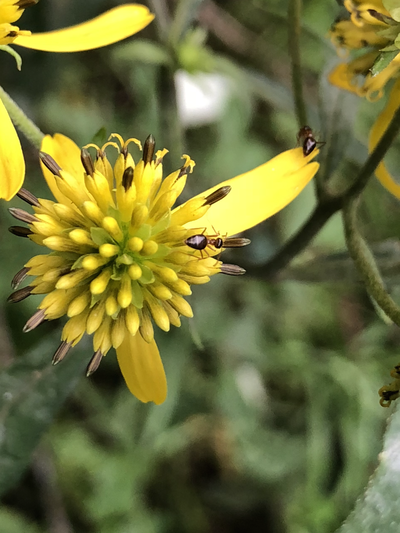 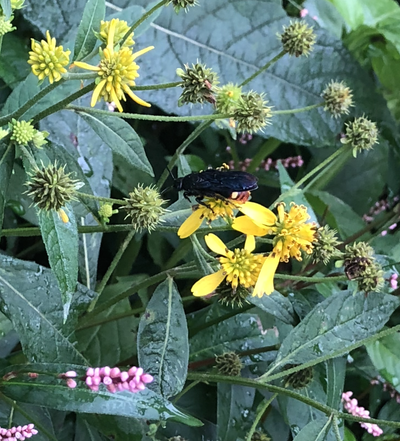 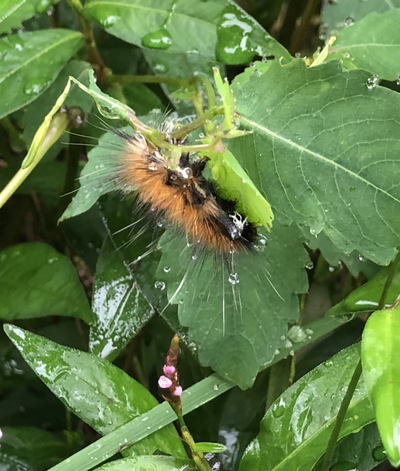 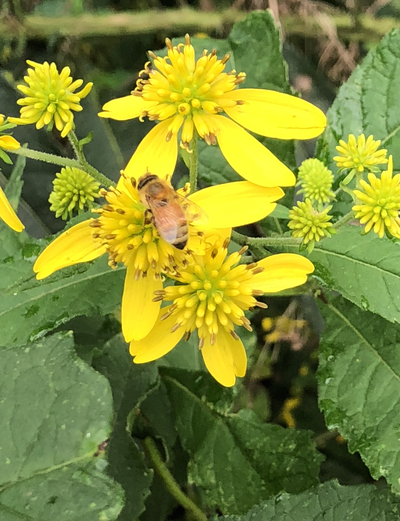 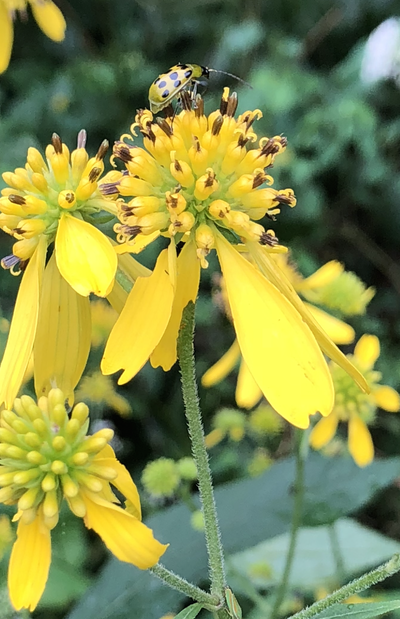 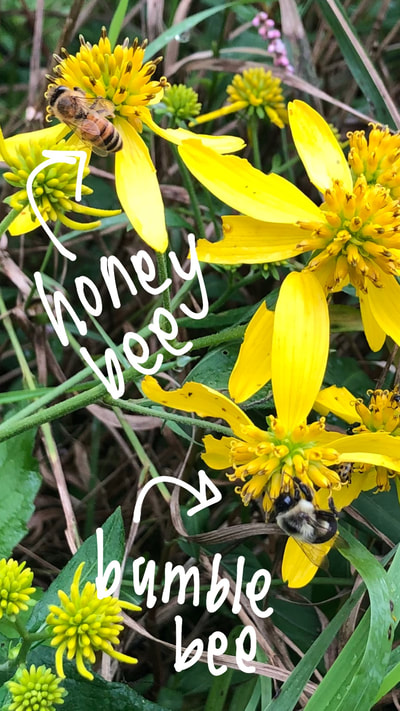 ​The first field trip of Sticky Innovation was visiting Greenacres Foundation, an educational facility used mostly to teach students about nature. It was an overcast, cool day and a little soggy from the past few days of rain. We took a walk around the tree line through the mushy grass, I was very happy I decided to wear my rain boots. At the start we were instructed to stand at one plant and remain still just to see what came our way. Though mostly looking for pollinators, we got excited about anything that moved.  Though insects are not good friends of mine, I enjoyed the stillness and the scientific observation of the plants. I had a small spotted beetle and a few ants climbing onto the small yellow flowers I had claimed. I didn’t think much of these as they were not the bees I had my mind set on, but our guide told us that these are actually pollinators as well, just not as effective as the bees. This is due to the fur that traps pollen as the bees wriggle in to get the nectar. From our mind maps we discussed the possibility of using alternative pollinators. I wondered if other insects were ever tried for domestication for pollinating or if the bees had always been used? I almost started to feel like an elementary school kid myself when we finally spotted a bee! We learned how to tell the difference between the honeybee and the bumblebee by the yellow and black stripes on the body. Even within the bees, the honeybee is the superior pollinator, using scouts to communicate a specific plant to collect nectar from and all the others stick to that same flower. This then contributes to the flavor of the honey, as we will find in our taste test coming up!

​The Live Well Collaborative is an incredible organization that utilizes trans-disciplinary skillsets to solve challenges in business, health, and travel. From the overview of the company we learned of the numerous projects and products being developed and the design thinking approaches that went into them. Craig Vogel took us through a project timeline from the lead in to the research, ideation, and refining web, and through to next steps. He explained the importance of promoting to the group and using language that relates to them (i.e. when working with hospitals referring to patients instead of customers). This feels applicable in solving our sticky problems with the numerous stakeholders involved from beekeepers to farmers to the general public. Marketing solutions in a light that makes the most sense for them to achieve our goal. Everything that Craig told us about Live Well made me think back to my Inquiry to Innovation Honors seminar from freshman year. Although it’s been a few years the design thinking methodologies that we practiced still guide me in group work and in my own brainstorming and problem solving sessions. I think this technique is one that should be more integrated into typical coursework. I love the idea of collaboration and innovation, thinking outside the box and creative solutions to everyday problems. I would love to have the opportunity to work on a project with Live Well so I’m very grateful that Sticky Innovation gave me the push to check it out! Getting to tour the Maker’s Space at the Innovation Hub was also a really cool experience. It’s amazing that UC has dedicated these resources for students and the training to utilize them! I’m really interested in improving my 3D modeling skills and being able to use the 3D printers as well as the other tools in the space will allow for me to really start from ground zero and develop some skills I never thought I’d gain from a class on bees! 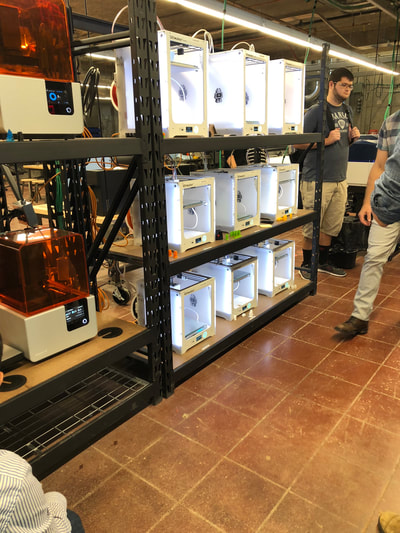 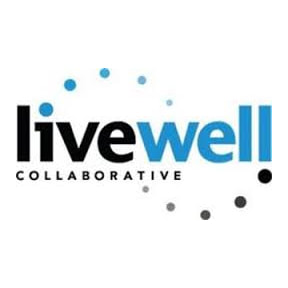 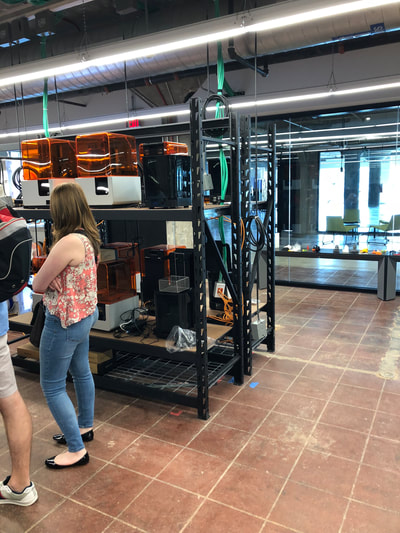 Through the Ideal Bee project we were able to utilize the technology available at the Maker's Space to bring to life our Low-Fi Ideal Bees. While learning to use modeling and drawing software we added features to protect, arm, and repurpose the anatomy of the honeybee as we know it. While we were all given the same task, our outcomes were all very different which was very interesting to see how the different skill sets and ideologies of the teams came into play. With technology advancing it is possible that these ideal characteristics could be made at some point in the future, but currently it poses the question of how these far-fetched changes could be morphed into something we could do today?
​The fishbowl discussion I participated in took on the second provocation posed. “Discuss the ‘ecological services’ bees provide to humans and what could replace those services if bees are no longer available. What might the possible unintended consequences of those replacements be?” From within the fishbowl, I felt we reflected on our own books and other knowledge we had from the Black Mirror episode to the viral turtle-plastic straw video. We pulled from different sources and each had something to contribute. Our main ideas became developing a mechanical bee, food that doesn’t require pollination, utilization of other pollinators, a mechanical device to pollinate, and hand pollination. While we would obviously prefer to save the bees and allow them to pollinate naturally, the future is looking more and more bleak. With the alternatives discussed potential problems were plentiful.  Through the mechanical bees, the cost of development and manufacturing, potential for foul play that may come from companies toward living bees, and the unforeseen potential of health effects from using these pollinators.

From outside the fishbowl it was kind of hard to sit quietly and not offer up an opinion! From the first question posed about the animal rights of bees and radical disengagement an idea popped up about unionizing beekeepers. I felt this was a great idea, if a beekeeper union could be made they could dictate the conditions that bees are working under and help to give them a voice! Another point from this discussion that developed a heated debate was capitalism and human greed and selfishness. A point I threw in from our discussion was that why fight it when you can use it! If there were tax breaks and benefits for being bee-friendly just as there are for other environmental issues it could help give the companies a good reason to make the shift.

Both experiences, in and out of the fishbowl, really made me think. While being in the fishbowl allowed me to voice my opinions then and there, being outside allowed me time to collect my thoughts and develop them. Within the fishbowl you almost have to say your point as soon as it pops into your head because of the quick pace and rapidly changing topics. The frustration of being outside the fishbowl comes from agreeing or disagreeing with points being made, but not being able to contribute!

​
Through the ideation phase of the final project our group struggled to land on a topic we could all agree on to tackle the wicked problem of the faltering bee population. We decided early on that we wanted to tackle youth education to foster an interest in bees from a young age. With our original idea being a field day similar to a D.A.R.E. program we found that this was already happening and apparently not very well known. From that point we had to make a decision to chalk our idea up as a failure and come up with another one. It was here that we kept our roots of youth education but brought it into the 21st century in the times of social media and viral videos. Our project became three parts, a video, a website, and an app. These three parts incorporated bee facts in the form of entertainment, from an infomercial like comedy to a virtual world game as a bee. In hindsight and from the critique I would have liked to have spent more time working on the app plans. Since the idea for the app came later in our project time we didn’t get to expand and show as much as we would have liked. Having used Illustrator a bit before it was fun to get more experience and develop my skills. That being said I think it was obvious this was the strong point of our project. Looking forward if we had more time and resources for this project, I think it would have been incredible if we could get someone who could actually develop the coding for the app and make it really come to life. Many ideas were thrown out from the critics and other classmates about the social aspects and the use of ads for bee research and conservation. I believe the app could be a suitable method of raising awareness for the wicked problem of saving the bees.